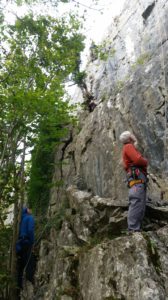 While Boris Johnson was delivering his rebuke of the Chequers Plan and with gusts approaching 30 mph, ‘Br’exit was inevitable and reentry to Langscar was negotiated for next Wednesday. Returning to Woodcutters enabled a few more ticks to be had which included Are Yew In (5b), Are Yew Out and Dodgy Brexit (6a+*). Two remainers had belated Birthday Surprise (5b) and Ben Hur (6a**) was defeated before Three Steps to Heaven (5c**) heralded an early departure to The Talbot.