You are here: Home / Archives for Mountain Biking

A couple of upcoming bike rides this month.

Get on your bike and Ride the Lights! – An Exciting Preview of Blackpool Illuminations.

Ride at any point along the promenade from Starr Gate at South Shore to Red Bank Road in Bispham. You can ride as much or as little of the route as you are able.

Ride the lights is not a bike race, it’s a fun and FREE bike ride open to all.

Five of us met at Feizor in time for a bacon butty before setting off on the Feizor loop. The route heads up past Feizor wood, through Wharfe, heading along Crummock Lane up to our lunch stop at Sulber Gate. Weather was dry, calm and clear giving fab views over Moughton Scars. The return downhill route took us back down Long Lane, Thwaite Lane, skirting under Oxenber Wood and back to base … for more tea and cake. Thanks Andy, Martin, Hannah, Andy and pickles who kept us ( mostly) together on route! 😂

A last minute arrangement but 3 of us are planning a ride from Feizor this Saturday, we are meeting at Feizor at 10.00. If interested please contact Shirley or Andy H (see members list for contact details)

A merry group of 7 (Shirley, Fiona,  John W, Chris H, Paul F, Anthony and myself) met for this unseasonably warm bike ride from Horton. Our route took us on The Pennine Way out to Birkwith Moor through Cam Woodlands and a lovely descent to Beckermonds.

Alas what goes down eventually goes up and so it did after Oughtershaw with the ascent of Fleet Moss, Just prior to us beginning the ascent Chris H and his E bike were seen (for the last time by us as he continued on)  making light work of the ascent. The rest of us Just got on with the job in hand of the ascent and eventually made it to the top with a bit left in the tank and with me  realizing I either needed a) a new saddle or b) better padding in derriere region which at the time felt like 2 raw steaks, a comparison I suggest you don’t dwell on.

Eight of us plus pickle enjoyed an evenings bike ride ride from Skirethorns near Grassington. Our route to us uphill onto Malham Moor and round to Bordley before heading back over Boss Moor as the sun was setting. Thank you John for organising this. 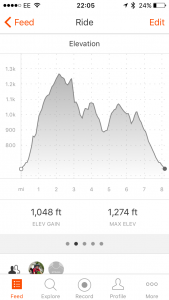 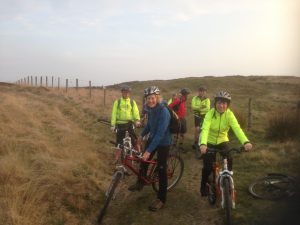 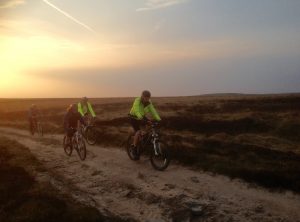