The weekend may have been rather damp but as usual, CMC spirits were high and 11 club members had an active weekend at the Smithy Gritstone hut in Thirlmere.

Some of us made the most of the Friday’s sunshine; Wardy cycled 17.5 miles (2850ft ascent) from Langdale to Coniston via Little Langdale and Tilberthwaite . Martin and Giles walked up Steel Fell to Helm Crag from Grasmere. Flo and I cycled a 17.8 mile (2560ft ascent) circuit around the back of Skiddaw from Threlkeld, repairing a puncture on route and still getting back in daylight !

Click here to view /relive the back of skiddaw ride video
Everyone had arrived at the hut by the evening allowing time to catch up and consider options for the weekend.

Saturday’s weather was as forecast …. wet and windy. Undeterred, Dick, Barbara, Paul, Michael, Giles and Martin decided to walk to Keswick via High Seat and Bleaberry Fell. The road on the west side of Thirlmere is still closed to traffic and in places quite tricky for pedestrians to pass. Careful route finding on the hillside took them under, over and around massive tees uprooted during March storms.  After refreshments in Keswick, they caught the bus back to the hut.

Wardy, Paul, Antony, Fiona and me, cycled a 10 mile circuit on bridleways to the south end of Thirlmere then back on the west side of the reservoir. Three high wire barriers on route meant bikes had to be passed over walls and under fences…. would have been tricky without Paul and Antony’s help! Almost back, we crossed the dam where unbelievably one of two sheep in a frenzied state ran up the sloping dam wall and leapt into the choppy reservoir. It survived the 12 ft drop and managed to swim to a rocky island where Antony kept a close eye and alerted the farmer – hopefully it’ll have been hoisted to safety by now.

Our communal meal was a the usual feast with contributions from everyone and a joint effort in the preparations. In the cosy dining area with the log fire blazing, and all doors open to let the heat out, we tucked into nachos and trimmings, chilli and a delicious selection of apple desserts.

The weather on Sunday was a little better in the continuous rain had changed to drizzle!  Paul and Antony ran a wet and windy 6 mile loop on Wansfell on route home. Martin and Giles walked to Swirls and back along the lake side and
FIona, Dick, Barbara, Paul, Michael and me went for a wander over High Rigg – atmospheric views over Skiddaw to the clear weather beyond. 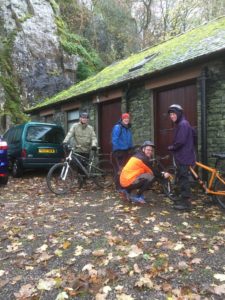 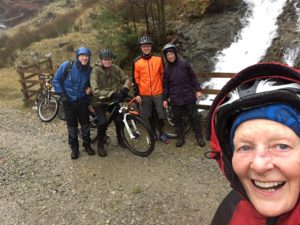 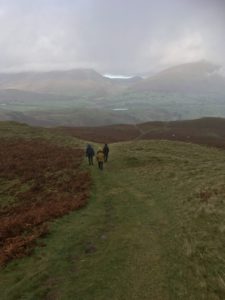 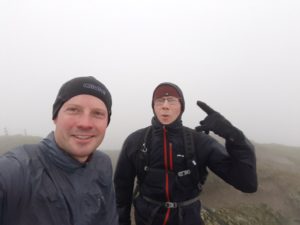 This was another great hut meet gathering and very enjoyable weekend  at a hut that has become a club favourite. Thank you to all who supported the meet.