Fabulous weather, fantastic outings, glorious sunsets, great company and one very special long term objective being met (more about that later) …what more could the nine of us who went to Elphin have asked for!
On Sunday, Fiona led us (Sylvia, Wardy, Steve, Dick and me) around the lovely horseshoe circuit of Beinn an Eoin (a Graham summit in Coigach). Expect to see a number of photo competition entries of Stac Pollaidh taken from the classic viewpoint! Meanwhile, JohnB quietly disappeared to tick a new Corbett, Col More! Those of you familiar with previous hut meet reports might recognise the recurring theme of John endearing nickname of the ‘Lone Wanderer’!
Four parties had different agendas on Monday. Dick and Steve spent the day on Quinag, Fiona and John cycled into a Corbett north of Loch More which was not far from Ben Klibreck that Sylvia and I puffed our way up – well worth it for the staggering summit views. Meanwhile, JohnB headed for Ben More Assynt and Conival. He chose to extend his walk by taking the ridge of Carn Nan Conbhairean down to the main road in the valley with a view to hitching 12 miles back to his car …. It was a quiet Monday evening. So when he eventually arrived back at base, the kitchen was peacefully quiet and tidy for his evening meal. Not for long though as we all, of course, wanted to know what he’d been up to! Pete and Sue also arrived during the evening to add to the banter and communal spirit.
With such lovely weather, there were just no excuses for a rest day, so on Tuesday, Steve and Dick headed to Handa Island Wildlife reserve (a 15 min or so ferry ride from Tarbet) to the seabird colony – a worthwhile trip. John, Fiona, Pete, Sue and me drove to Corriemulzie Lodge for the 7km and 9km bike ride to our respective hills…. another new Corbett for John and Fiona, and Seana Bhraigh via the scramble of An Sgurr for Pete, Sue and me. What an awesome circuit and such amazing panoramic views. Meanwhile, JohnB sneaked off again in search of another Corbett tick, Ben Coigach and also met up with Chis and Annie who had rented an apartment in Ardmair for the week.
Keen for another biking adventure on Wednesday, John Fiona and Sylvia chose a cycle ride from Ullapool after a morning snack in the cafe, Pete and Sue investigated Suilven, while the rest of us took in more of the local hills and visited Knockan Crag.
Thursday dawned bright and sunny. Having expected rain, I’d slept soundly but woke to find John calmly preparing for his long awaited adventure on the Old Man of Stoer …and I was going with him (Eek)!! Conditions were going to perfect; a low spring tide, very little wind and no rain. It was better than perfect and stayed clear and sunny all day. Two lads were already preparing for the 1st pitch when we peered over the cliff top at midday. After scrambling to the shore and assurance that the Tyrolean was secure John easily manoeuvred across to the other side. A first for me and downhill most of the way, it seemed a relatively easy crossing (apparently John was giving a helpful tug every so often). We walked around the back of the stack and John began the climb, traversing across and up to the 2nd belay. To keep me in view, he added a couple of additional pitches. Every handhold and ledge of the route was awesomely exciting, including the delicate traverse around the front of the stack. The crux, however, wasn’t overly exciting. As expected, John had prepared for all eventualities and after failing on the one two three PULL approach, I was hoisted into the chimney to finish the pitch. We reached the summit at 8pm and quietly soaked up the magnificent views and stunning landscape. A couple on the mainland watched, cameras poised, as John prepared the abseil ropes and launched himself into the 60m, mostly free hanging, abseil. I followed on to find him hopping from one rock to another to avoid wet feet. We retrospectively agreed that maybe it hadn’t been such a good idea for him to carry the ropes and rack across the Tyrolean at high tide!! Back on the mainland at sunset, we were able to let folk know of our whereabouts and reached the car to find that Leigh, the lovely lady from Living the Dream Cafe had left two cans of drink and a lovely message on the car. For very different reasons, we’d both lived the dream!
Another glorious day on Friday; Pete, Sue, Steve, Dick and me went to coastal Rieff to rock climb and cycle while and Fiona, John and Sylvia had another biking adventure from Kylescue to Glendhu Bothy, paddling in the sea and having ice creams (it was a holiday after all)! John quietly reflected on another new Corbett, Breabag.
We all left the hut on Saturday morning with big smiles having had an amazing time (and already planning the return trip). 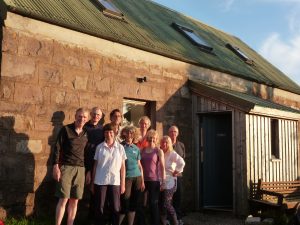 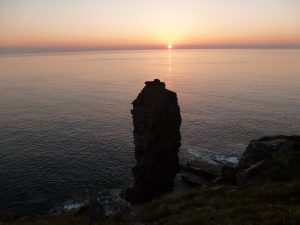 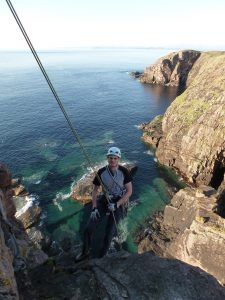 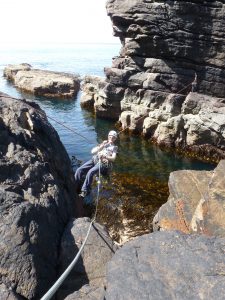 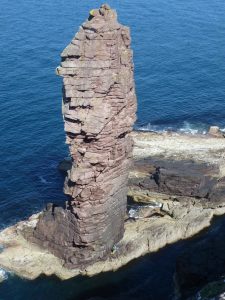 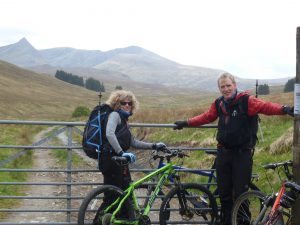 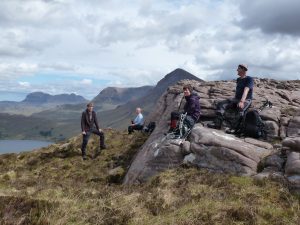